Scam of the Week – Aer Lingus and WhatsApp 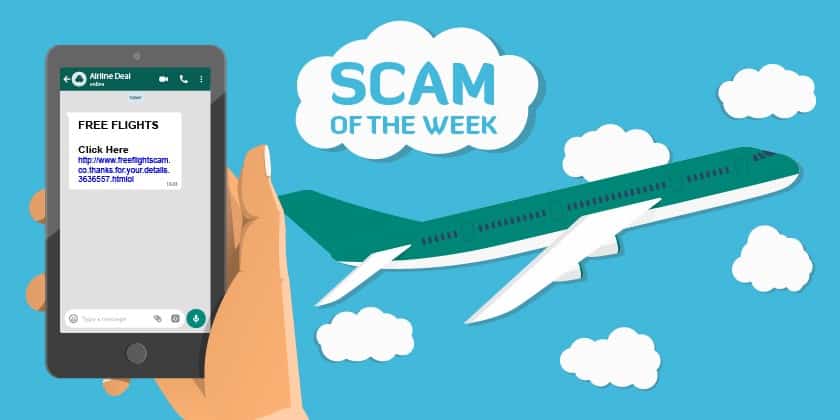 Earlier this week, a number of people were targeted by a fake WhatsApp scam claiming to be from the Irish airline provider Aer Lingus.

The messages which appeared to be from the airline, tried to trick people into clicking a dodgy link for free flights. On Monday, Aer Lingus confirmed on that the messages received through WhatsApp were not from them.

‘We don’t run promotions on WhatsApp. If you receive one claiming to be from us, it’s 100 percent fake. You will not receive free flights. ‘Please do not engage with it as your data privacy may be compromised if you do so.’

People who receive such messages are advised not to interact with them and delete them immediately.

These type of scams, known as smishing (SMS phishing) are a form of social engineering, which fraudsters are increasingly utilising as more people access the internet through their mobile devices.

This isn’t the first time Aer Lingus has been used as bait in attempted scams. In May 2017, a fake survey offering free tickets quickly circulated through Facebook. The post claimed to be giving away 282 tickets as a means of celebrating the airline’s 42nd anniversary. The survey however, proved to be a scam, that was designed to trick people into providing personal information on suspect websites, whilst sharing the scam with their Facebook friends.

The year before that, another scam appeared on Facebook, claiming to give away ‘2 Free Aer Lingus’ tickets – this time in celebration of the airline’s 80th anniversary!

Always remember – if it seems to good to be true, it usually is.

For further information on how MetaCompliance can help protect you online, click here.