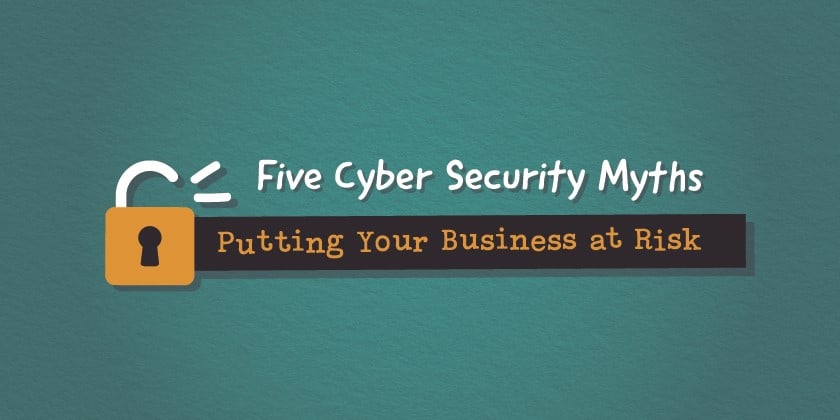 In recent years it’s been hard to ignore the explosive growth of cybercrime.

It’s become an incredibly lucrative industry which has attracted the attention of cybercriminals who are keen to capitalise on this growth market.

Cyber-attacks have dominated the headlines worldwide and it’s predicted that the cost of cybercrime will be in the region of $6 trillion by 2021. This represents the biggest transfer of economic wealth in history.

The attacks highlight the vulnerability of businesses operating in a digital economy and it’s become increasingly obvious that no organisation is immune to this growing threat. Cyber Security has now become a key strategic priority for most organisations as they realise the devastating impact a data breach could have on their business.

Despite an increased awareness of the cyber threats faced, there are still a number of misconceptions that may lull organisations into a false sense of security. Below are five of the most common Cyber Security myths that could be putting your business at risk.

Myth 1: Cyber Security is the IT Department’s Responsibility

Cyber-attacks are becoming increasingly more sophisticated, devious, and the easiest way for criminals to bypass traditional technological defences is to target an organisation’s employees. The phishing emails that we’re seeing today are almost indistinguishable from official company correspondence so unless staff are effectively trained to recognise these threats, organisations remain vulnerable to attack.

To ensure that staff take these threats seriously, it’s vital that an organisation’s Senior Executive team take ownership of Cyber Security and put in place a robust company-wide security policy that addresses the risks.

It’s a myth that it’s just the big multinational companies that are being targeted, every organisation is a potential target for hackers. Cybercriminals are increasingly going after smaller and mid-size organisations as they typically have less money and resources to invest in Cyber Security. This leaves them especially vulnerable to attack, and according to research from the Ponemon institute, 61% of small and midsize businesses have experienced a cyber-attack in the past year.

Cybercriminals are opportunistic and smaller organisations tend to have more vulnerabilities to exploit which makes them a prime target for attacks. It all comes down to money, if hackers can penetrate a larger amount of small to mid-size organisations with less effort, they will tend to favour this approach.

Myth 3: A Firewall and Anti-Virus Software Will Keep Hackers Out

There’s no doubt that a firewall and Anti-Virus software are crucial in protecting networks from unauthorised external access. However, these technological defences cannot solely be relied upon to protect an organisation’s assets. Hackers are continually looking for vulnerabilities to exploit, whether this is with applications or with people. If they can successfully manipulate an employee to gain access to a network, they can bypass all network security measures rendering them useless.

Similarly, if they are able to find a vulnerability within an application, they can exploit this to gain access to a system. Manufacturers will regularly release software updates to patch any bugs within their software but unless organisations are continually applying these patches, they are at risk of being hacked.

Organisations may also be under the assumption that Anti-Virus Software will protect them from being infected with a virus, but with 230,000 new malware samples being produced every day, it can be difficult to defend against these evolving threats. Hackers have found cunning ways to circumvent this software and work quietly in the background stealing sensitive data.

Myth 4: Your Data is of No Value to Hackers

Organisations may believe their data is of no value to hackers, but this couldn’t be further from the truth.  Data is a valuable commodity and cybercriminals are keen to capitalise on this data to make money and commit fraudulent activities. Identity theft is the main driver behind all attacks and accounts for 65% of breaches and over 3.9 billion of the compromised data records in 2018.

A large amount of this data will end up on the dark web where criminals can make a tidy profit for trading this stolen information. The growth of Cybercrime-as-a-service (CaaS) has exacerbated this problem and it’s no coincidence that the growth in this thriving global industry has correlated with a massive rise in cyber-attacks and data breaches.

All organisations are targets and it’s vital they put in place the correct measures to safeguard sensitive data, reduce threats and protect their reputation and brand.

Social engineering is the main technique used in the majority of cyber-attacks around the world. It typically involves some form of psychological manipulation and is commonly used by cybercriminals to trick an unsuspecting user into sending them sensitive data, infect their computers with malware or open links to malicious websites.

These scams prey on our trusting human nature and our inherent belief that people are good and their intentions are sincere. Unfortunately, this is not the case.

To ensure that staff can identify and respond appropriately to these threats, it’s vital they receive regular Cyber Security Awareness training. Training employees once a year on Cyber Security is simply not enough to equip them to deal with these continually evolving scams. Security policies could be become useless unless organisations have a thorough and continual way of monitoring Cyber Security compliance.

The use of engaging videos, realistic scenarios, quizzes and real-world phishing simulation tests will ensure that staff are fully trained to recognise and identify the most up to date threats.

MetaLearning Fusion is the next generation of eLearning and it has been specifically designed to provide the best possible Cyber Security and Privacy training for your staff. It enables organisations to build bespoke courses for their staff from an extensive library of short eLearning courses. The courses are easy to create and can be personalised and branded to make the content more relevant to your employees. Get in touch for further information on how MetaLearning can be used to transform Cyber Security training within your organisation.